Dr. Laviolette has made an amazing discovery:
New Pathway Discovery: The formulated ingredients bond and synergistically attach to the PPAR receptor allowing the Mentanine® formula to cross the blood-brain barrier “BBB” to target the central nervous system (the brain) with amplified effects and efficacy. CBD by itself does not do this.
With improved efficacy, Mentanine® addresses neurological conditions such as anxiety, depression, PTSD, and addiction.
Mentanine® (plant-based cannabidiol “CBD” and natural IP formula)

Dr. Laviolette stated, “Our CBD-based formulation works synergistically and has multiple times the efficacy compared to other approved CBD products on the market. This discovery sets the stage for substantially smaller dosages of CBD generating the desired results without the negative side effects. There is strong evidence that this formulation is also a very promising anti-epilepsy treatment, which I believe makes the formulation even more promising for these applications.”

PPARs are critical multi-role receptors that interact with CBD. Unlike GPR55, however, CBD is an agonist, not an antagonist. In other words, it triggers – rather than suppresses – the PPAR receptors 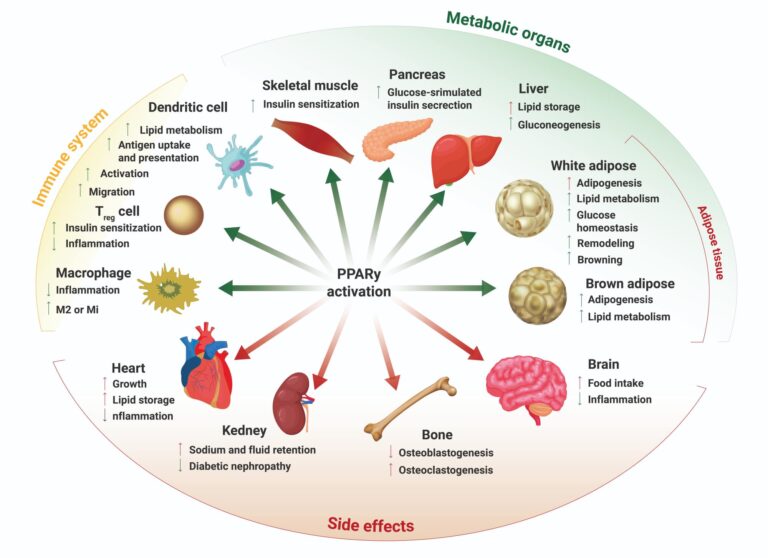 PPARs as Nuclear Receptors for Nutrient and Energy Metabolism

Mentanine® can be administrated with a significantly faster rate of absorption and significantly smaller doses compared to other CBD medications, therefore, reducing or even eliminating the negative side effects of liver toxicity caused by the high consumption of CBD oils available today.

One of The Characteristics of dopamine cells is that they have a tonic mode of firing and burst mode of firing. Therefore, we analyze both the frequency and burst changes following infusions.

The left graph is looking at the frequency of VTA dopamine cells. The Y-axis is frequency %baseline). Just to clarify what this means: if we look at the 100ng CBD group, it shows about 85%. This means that with an intra-NAc infusion of 100ng CBD, the dopamine cell would decrease in frequency by about 15%.

The right graph is looking at the difference in burst %. A burst is a group of signals occurring in a short period of time. Specifically, we define a burst to be an event where 2 spikes occur within 80 ms. Burst does not occur very often, so it is inaccurate to use the % baseline in the Y-axis (if 1 burst occurs during pre-infusion and 0 bursts during post-infusion, that’s a 100% decrease although it is only 1 less event). Instead, we got the number of bursts that occurred during the pre-infusion recording and determined the number of spikes that occurred in those bursts, and divided that by the total number of spikes that occurred during the pre-infusion recording. We did the same for the post-infusion recording and found the difference between those two values.

One-way Analysis of Variance (ANOVA) revealed that these groups are not significantly different. However, we see that 100ng caused a decreasing trend in VTA dopamine frequency. 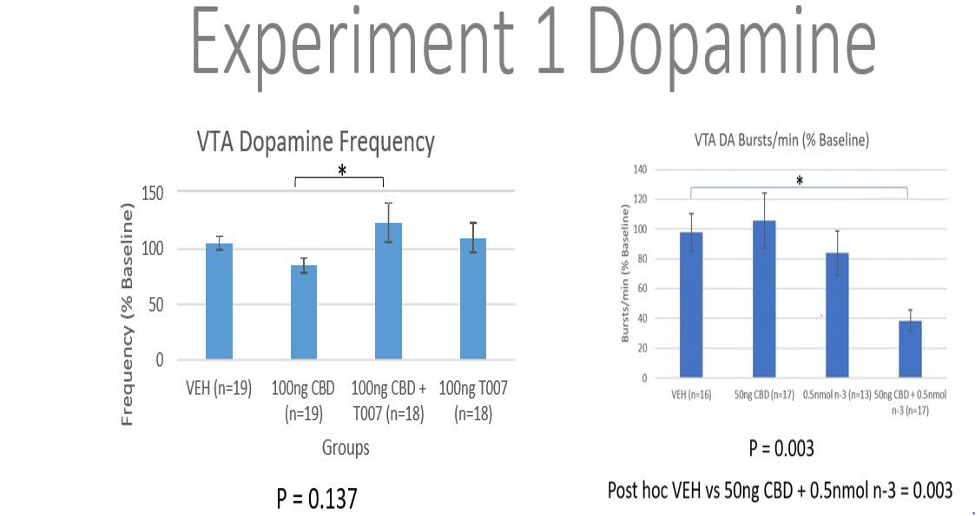 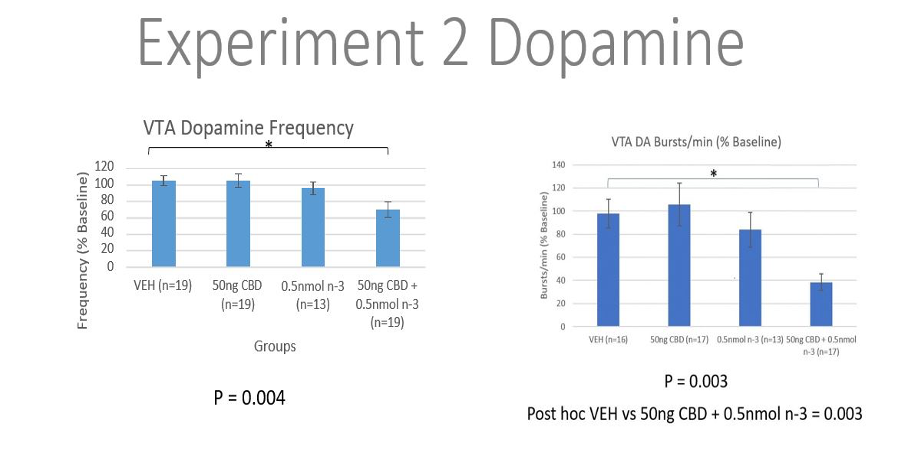 In the second experiment, we combined a lower dose of CBD (50ng) with omega-3 fatty Acids.

Left graph: one-way analysis of variance (ANOVA) revealed that the groups are significantly different. While 50ng CBD and 0.5nmol of omega-3 were ineffective by themselves, post-hoc analysis revealed the combination of CBD and omega-3 caused a significant decrease in VTA dopamine activity

In experiment 3, we wanted to see if we can replicate the results of experiment 2 with lower doses of CBD and Omega-3.

Left graph: one-way analysis of variance (ANOVA) did not yield a significant effect (p=0.194), however, post-hoc analysis revealed that while 1ng CBD and 0.25nmol Omega-3 caused a significant decrease in VTA dopamine activity compared to vehicle.

The addition of T007 to this combo blocked its effect which suggests that the CBD with Omega-3 may produce their effect through PPARg. 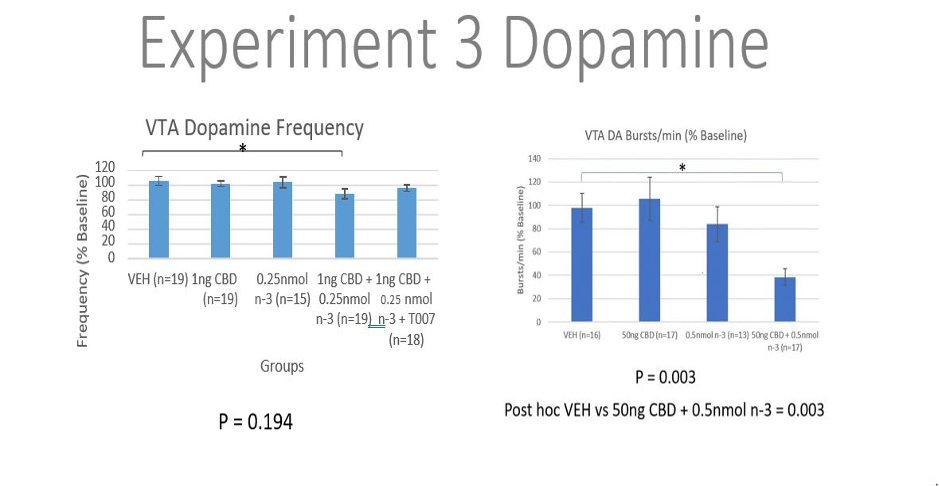 Please click on the link below to view the presentation